Modeling of Spalling in PFC3D — A Quantitative Assessment

The Swedish Nuclear Waste Management Company (SKB) is interested in developing a 3D discrete model to predict spalling on the excavation boundaries of underground repositories for the long-term storage of spent nuclear fuel. Previous work showed that spalling could be captured using a flat-joint contact model material in PFC3D (Potyondy and Mas Ivars, 2020). This project provided a quantitative assessment of modeling spalling using PFC3D to study both lab- and tunnel-scale behavior.

Itasca evaluated the ability of the PFC3D code to model spalling by simulating the Atomic Energy of Canada Limited Underground Research Laboratory (URL) Mine-by Experiment test tunnel in the Lac du Bonnet granite batholith at a depth of 443 m. The spalling process observed in this tunnel resulted in well-developed v-shaped notches in the roof and floor, as seen in Figure 1. The notch tip consisted of a process zone in which the rock had been crushed. The notch sides consisted of thin slabs that spalled off the excavation boundary where some of the slabs were as thick as the grain size of the rock.

The Mine-by Experiment simulations were performed using FLAC3D-PFC3D coupled models, in which a slice of the PFC3D material (approximately four grains thick) was embedded within a larger FLAC3D model. This improved modeling efficiency by ensuring that the spalling process was captured in the PFC3D region using the fewest number of particles or rigid blocks while maintaining proper far-field boundary conditions as provided by the FLAC3D model.

The primary conclusion of this study is that the tetrahedral-grain rock mass material is better suited to model spalling than either of the other two materials for the following reasons: 1) damage lobes[1] are largely absent; and 2) the sharp shape and extent of the notch, as well as the mechanisms occurring in the notch, closely resemble what occurred in the Mine-by Experiment test tunnel. These features are not well matched by either of the other two materials.

From evaluating the lab-scale behavior, it was established that all PFC3D materials can be calibrated to match most of the material properties of intact Lac du Bonnet granite. As the spalling process occurs at the grain-scale, only a discrete model with a particle size equal to the grain size of the rock will be able to capture the process in detail. Although this is not achievable with current computing power, the discrete model can predict the shape and extent of the notch in the Mine-by Experiment when using a relatively small grain size that is made possible by using a coupled FLAC3D-PFC3D approach.

[1] The damage lobes consist of a crack swarm emanating from the tunnel surface and oriented approximately 45 degrees from the direction of the maximum principal stress, and the cracks are aligned with the compressive force chains. The damage lobes appear to be formed where the stress exceeds the crack-initiation stress of the material. It is unlikely that damage lobes are present in the rock mass surrounding the Mine-by Experiment test tunnel. 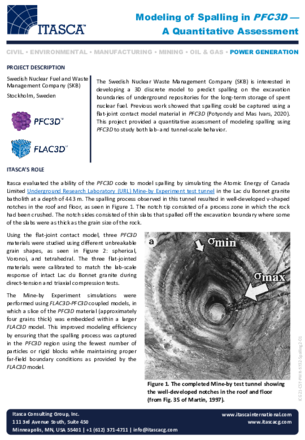